A new update for Instagram appears to suggest, Facebook has started merging chats on the app with its Facebook Messenger application service. On 14th August evening several Magazee.in readers noticed an update screen popped up in the Instagram mobile app. Along with an update Instagram has also rolled out new features like a colorful lookup for chats, swipe to reply, additional emoji reactions. 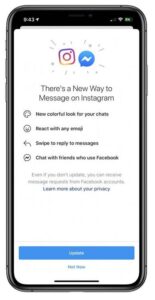 Soon we will be able to send messages to Facebook friends from WhatsApp too. Check out this link to see How do I manage Instagram messages and comments from my Facebook Page’s inbox? | Facebook Help Center

In a report last year, Facebook has announced it was creating insightful integrations to allow for a better connection, but that is three messenger services (FB Messenger, Instagram Messenger, WhatsApp) would continue to appear as standalone Apps. CEO Mark Zuckerberg has also said that he wants the system to be end-to-end encrypted. By Integrating is most popular apps, FB may be competing more directly with Apple’s iMessage.